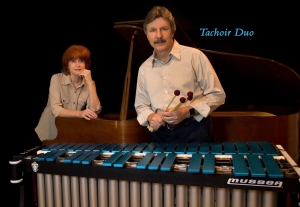 Jerry Tachoir has earned critical acclaim as a bandleader, percussionist and soloist on vibes and marimba. He’s played with major symphony orchestras, been featured at clinics, and held master classes both nationwide and globally. The duo chose Music City as the destination for the world premiere of a new composition “Reflections for Vibraphone and Piano,” which will be part of their two-set performance at the Nashville Jazz Workshop’s Jazz Cave August 3.

Jerry Tachoir took time from a very full schedule to graciously answer a few questions for Giant Steps last week while preparing for the upcoming concert.

(1) What got you initially interested in jazz and did you begin on vibes or marimba?

“It was the Herbie Hancock Band – it made the hair on my neck stand up. I had to figure this out. At this time, I already had an endorsement with the Ludwig/Musser company that makes my instrument. I was at a music event doing a presentation for Musser and I had the chance to meet this other Musser artist, vibist Gary Burton. I mentioned to Gary my interest in learning more about jazz and improvisation. He then invited me to attend Berklee College of Music in Boston to be his student and study vibraphone and improvisation. I did and don’t regret it. Best experience I could have ever had.”
“The second part of this question is that I actually started as a drummer and had a great teacher in Pittsburgh, Eugene “Babe” Fabrizi, who demanded that I be not only a drummer, but also a percussionist. This let me into the mallet side of percussion and I was hooked on vibes and marimba.”

(2) You have played in or with symphony orchestras quite a bit. What made you decide to focus on jazz rather than classical music?

“As I was attending Berklee, I was commuting back and forth every weekend from Boston to Pittsburgh. At one point I had to decide what I wanted to do. Even though I loved the orchestra, I felt like I had no voice – was just 1 of 100. My personality demanded that I select my own music and play what and where I wanted to. I needed to create and contemporary jazz gives me that vehicle.”

(3) Who would you consider influences and/or favorite players?

“Obviously since I studied with Gary Burton, he was a very strong influence and I really like his professionalism and clarity, not only on his instrument but in conversing. At one point, I quit listening to vibists as I didn’t want to sound like anyone else. I then focused on pianists. My favorites were Bill Evans, Chick Corea and Keith Jarrett. I actually consider my technique on the vibes to be more pianistic. My left hand does the accompaniment and my right hand does the melody and improvisation, and both help with the harmony.”

(4) What were some important albums and/or albums that you consider all-time favorites?

“While at Berklee, just about anything that came out on ECM records was what I loved. I heard a lot of Eberhard Weber, Jan Garbarek, Chick Corea, Keith Jarrett, then later Pat Metheny. Early on I really enjoyed the Modern Jazz Quartet, they were polished and very smooth.

“While at Berklee I took a work study job in an office that did student scheduling. One day this red head with a French accent showed up to adjust her schedule. Since I took French in High School, I was asked to help her. I met her after class and asked her out – then it all started.”

(6) How do you decide which songs will feature vocals and which ones will be just vibes/piano?

“This is totally spontaneous. Marlene has incredible perfect pitch and will sometimes use her voice to enhance a melody or during her improvisations. It has become one of our signature sounds and a nice way to orchestrate the music.”

(7) What was behind your decision to relocate to Nashville?

“We were living in New York City. I took a job playing percussion in a musical that was to go to Broadway called “Pennsylvania USA.” It was written and produced by Paul Crabtree, who did a lot of work at Opryland and was from Nashville. The show opened in Hershey, Pennsylvania and closed after several months because of the 3 Mile Island Nuclear disaster. Anyway, all the producers and musicians told me I should move to Nashville as my skillset would be very useful there. Here we are since Fall of 79.”

(8) How would you characterize the jazz scene and how much has it changed in the time that you’ve been here?

“With the current popularity of Nashville and the influx of musicians, it is encouraging to see the interest in Jazz. During the 80’s and 90’s there seemed to be more places to play that would actually pay the musicians. When we first moved here, I was told by most of the local musicians to not say that I was a jazz musician, as I would not be hired for studio work. Sorry, but this is who I am and what I do, and it has been successful for me. I have been the first call mallet player in Nashville for quite some time as everyone knows I can both read and improvise very well.”

(9) You also do clinics and a lot of teaching. What kind of tendencies or recurring problems do you see with newer players on your instrument, or just in terms of aspiring jazz players in general?

“I recently had this discussion with a friend at Berklee who is the chairman of the piano department. He said and I agree the dedication of students toward practicing and perfection their instrumental ability is not the same as when we went to school. Students now have too many distractions with the Internet and computers. They seem to be better at technology than spending the time on their instruments. My generation went to college to perfect our skillset. There are lots of students now at college who don’t know what they want and are just picking up an instrument because their parents wanted them to go to school.”

(10) When did you begin working on the new world premiere piece and why did you decide to make it a suite?

“Composition is Marlene’s department. This has been a work in progress for a couple years. This Suite is very special to Marlene as it reflects her state of mind in a world that is very difficult now. After movement One, the story wasn’t complete, it needed to move on. The composition is entitled, “Reflections for Vibraphone and Piano”. Movement One is called “Mindful,” Movement Two is “Tearful,” and Movement 3 is “Hopeful (with nervous energy).” This composition is long form writing, and Marlene refers to it as Chamber Jazz, and it is very intricate with a strong classical influence. Each solo section is designed to reflect the mode of that section and the soloist becomes an integral part of the composition.”

(11) Do you plan to do any touring and/or recording in the near future?

“Yes, our immediate plans are to record this Suite along with other original compositions by Marlene for a Jazz Duo of Vibraphone and Piano.”

(12) What other types of things are you interested in doing professionally down the line?

“We have a finished Jazz Concerto for Vibraphone and Orchestra that we want to get played as well as some chamber orchestra pieces. We will continue touring with our Band – The Jerry Tachoir Group as well as the Tachoir Duo of Jerry and Marlene. We really love what we do and plan to continue performing our original music in various ensemble settings.”

The Tachoir Duo presents the world premiere of “Reflections for Vibraphone and Piano” as part of their two set performance at the Nashville Jazz Workshop’s Jazz Cave Friday August 3, beginning at 8 p.m.. Tickets are $25 ($15 for high school and college students. Tickets are available at Brown Paper Tickets or by phone at 800-838-3006 24/7, and 615-242-5299 during business hours.