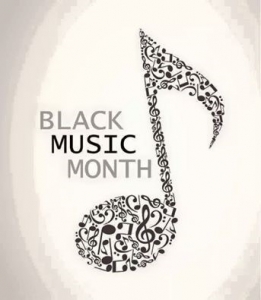 June has officially been celebrated as Black Music Month since 1979 when President Jimmy Carter decreed it as THE month of Black music. It was renamed African-American Music Appreciation Month by President Barack Obama in 2009. In one of his final proclamations in 2016, he said, “African-American music and musicians have helped the country to dance, to express our faith through song, to march against injustice, and to defend our country’s enduring promise of freedom and opportunity.”

But in an era of backlash and regression, it is more important than ever that the contributions of ALL black music idioms and musicians be celebrated, not merely the handful who get airplay on commercial radio, appear on various TV shows and in films. Sadly, almost from the beginning, there has been a tendency by many who celebrate Black Music or African-American Appreciation Month to focus only on what’s contemporary, with an extremely narrow definition of even that term.

It has long been a problem that much of the music coverage in predominantly black magazines and newspapers spotlights just commercial hits. Now there’s absolutely nothing wrong with appreciating and recognizing that music. I grew up on Jet’s Soul Brothers Top 20, and remain a huge fan of traditional R&B, soul, funk, some disco and old school rap, as well as Golden Age gospel.

But the absence from black publications of consistent coverage for jazz and blues musicians, with a handful of exceptions, remains a major problem. It is hardly enough to spotlight a Kamasi Washington or any other jazz artist who has done so well they’re getting mainstream attention while you ignore pretty much everyone else, and give little emphasis to or focus on the numerous local jazz and blues scenes in many communities across this nation.

Because contrary to what you might think if you regularly read Essence or Ebony or subscribe to several black websites, there are still plenty of black folks who enjoy jazz and blues, and they’re not all in their 50s and 60s. There are also young black musicians, men and women, playing the music as well. The interesting thing about Washington is he enjoys as much of, if not more, a presence in the Hip-Hop World due to his work with Pulitzer winner Kendrick Lamar as he does for his two multi-disc jazz releases.

There remains a great need for a black-owned and operated music magazine that covers the full spectrum of African-American idioms and genres, including classical. No, I’m not calling for an end to Down Beat, Jazz Times or Jazziz, nor am I condemning the various jazz-related websites. For the most part, they do an admirable job given the continuing disproportionate amount of resources available for any type of publication that doesn’t tow the line in regards to mostly focusing on celebrity gossip and chart-bound performers. However, their primary concern is the audience period, not necessarily trying to update and uphold the grand traditions of black music.

So, just as I have concerns and a degree of ambivalence each February when Black History Month rolls around, I have that same feeling regarding June and Black Music Month. Some of that is because for me EVERY day is one to celebrate Black History and Music. But some of it is also a feeling that both celebrations get caught up in too many perfunctory and basic presentations, and aren’t driving the cultural conversation in the manner that they could or should.

My hope is that in the future Black Music Month proves a catalyst for looking at realistic ways to improve the lot of Black musician across the board, get more attention for a host of styles and artists who are ignored by corporate radio, and ensure that Black music in all idioms remains a positive force for change at a time when much of the progress towards equality and social justice in this nation is being eroded at best, and sometimes undone. 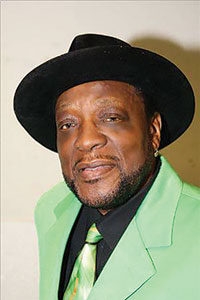 Seven-inch singles, or 45s as they were called at one time, were the first records I ever purchased. My four most prized possessions as a young kid were a transistor radio with an earpiece that looks remarkably like the ones they have now for smartphones (though nowhere as sophisticated sonic wise), a library card, a first baseman’s glove, and a truly cheap record player with a ceramic cartridge and the ability to stack 45s via a bulky adapter. One of my favorite songs as a nine-year-old (1961) was “My True Story” by The Jive Five featuring Eugene Pitt. It was a great bit of genre-bending, as it nicely merged elements of vintage doo-wop and the emerging soul sound that was fast supplanting all other forms of Black popular music.

The Jive Five would have three more hits the next year, the biggest being “I’m A Happy Man,” which I actually liked better than “My True Story” even though it wasn’t as big a hit. The Jive Five then disappeared off the charts, but Pitt and company kept performing and eventually became a staple on the oldies circuit, even making an appearance on the PBS special “Doo Wop 50.” They later had a 9/11 tribute song titled “We Will Never Fall,” though it was credited to “Voices For America.” But that was unquestionably Eugene Pitt’s still vibrant voice powering the tune, even though at that point he was 63 years old.

Eugene Pitt passed June 29 at the age of 80. While the Jive Five didn’t have a host of hits, the ones they had become favorites on the “beach” music circuit, where “My True Story” and “I’m A Happy Man” can frequently be heard. Pitt continued singing almost up to the end, and he’ll be remembered for those gems,  and for being a champion of doo-wop and vintage R&B throughout his career. 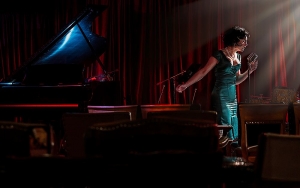 Nashville has many fine jazz and jazz-influenced vocalists, and Stephanie Adlington has added her name to the roster of singers who should not be missed by fans of not only the Great American Songbook but those who enjoy a creative approach to multiple songs. Adlington is now appearing regularly at Rudy’s Jazz Room, 809 Gleaves Street, and her June 22 date proved a delightful mix of idioms and both originals and covers.

Adlington has classical training. something reflected in her crisp articulation and nicely paced storytelling and narrative flow. She’s even coined a term for her sound, “jazzacana,” a combination of jazz and Americana. But she’s also able to effectively shift between theatrical tunes and more pop-oriented standards because she’s comfortable in any rhythmic setting.

Though not a scat singer, nor a stylist who deals in high range theatrics or other vocal gimmicks, her voice has plenty of power and range. She’s unafraid to tackle songs made famous in one form and do them differently. Bobby “Blue” Bland’s “Who Will The Next Fool Be?” for instance was one of his trademark shouting stanzas. Adlington retained its edge and confrontational/combative lyrical elements, but slowed the tempo and instead let her delivery imply the “in-your-face” sensibility Bland directly projected.

She was at her best on such standards as “Autumn Leaves,” “Bye Bye Blackbird”  and “Night and Day.” On each one, she was impressive in establishing the tune’s familiar mood, then putting her own stamp on it via extended treatments. Adlington can be elegant, teasing, or bluesy, and she clearly enjoys communicating with her audience as well as the band members, especially bassist Jimmy Sullivan and guitarist Adam Davis, who handled all the solos during her first set. Another twist  Adlington presented on “Bye Bye Blackbird” was making  it a duo showcase for her vocals and Sullivan’s impressive answering bass responses.

The absence of either piano or brass/reeds provides Adlington plenty of space, which she smartly utilizes to ease or flow rather than rip or blaze through tunes. Davis and Sullivan proved dynamic soloists, with Davis sometimes delivering emphatic statements with lots of notes and other times supplementing Adlington’s vocals with light coloration or smooth fills. Sullivan was always explosive on bass, with a particularly masterful solo on “All of Me.” He didn’t settle for being a passive accompanist but was both a demonstrative rhythm section contributor and superb player when given the spotlight. Though drummer Bryan Brock didn’t solo during the set he was a steady and reliable percussive force, establishing ideal settings for Adlington and meshing nicely with Davis and Sullivan.

There were also some content surprises during the nearly 55-minute set. These ranged from an elegant version of Dinah Washington’s “Teach Me Tonight” to some humorous audience interaction (howls) on her rendition of Sam The Sham & The Pharaohs “Lil’l Red Riding Hood,” and a breezy rendition of Mama Cass’s “Dream A Little Dream of Me.” There was also a dynamic torch version of Patsy Cline’s “You Belong To Me,” one of a handful of non-country tunes Cline made just as memorable as her country classics.

Her next dates at Rudy’s are July 20, August 24, and September 21. If you enjoy sophisticated, yet engaging and energetic treatments of varied idiomatic material don’t miss a chance to hear Stephanie Adlington.