Editor’s note: Eugene Holley Jr. is a jazz journalist and essayist. His writings have appeared in DownBeat, Hot House, Playbill, and Wax Poetics.

1. What initially got you interested in music and in writing about it? 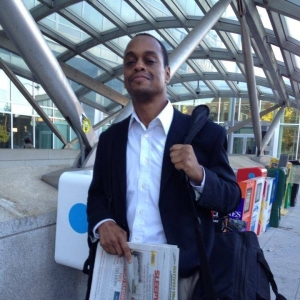 I’ve always been into music. My mom sang choral music in college with the great black classical composer R. Nathaniel Dett. My dad sang some gospel music with his brothers as a kid. My older brothers (they are ten and eleven years older than me) listened to Motown when they were teenagers in the sixties. I absorbed all of those influences growing up in the sixties and seventies. I was also listening to Herbie Hancock, Donald Byrd, the Crusaders, and a lot of groups that bordered on soul, R&B and jazz stylings during that period, when FM radio was coming into its own in the early seventies. But it wasn’t until I heard Miles Davis’ Kind of Blue in the early eighties that I finally got hooked on jazz.

My writing career was not planned. In 1981, the first thing I ever wrote professionally was a review of George Benson’s Give Me the Night, for a local Wilmington black newspaper. In 1988, I wrote for radio station WDCU-FM’s Program Guide.I was a replacement DJ there. But it was Willard Jenkins who is responsible for my career as a writer. I worked for him at the National Jazz Service Organization in 1990. I wrote for the NJSO Journal. The next thing I knew, he got me to contribute to JazzTimes and Down Beat magazines. He saw something in me that I didn’t see. I’m grateful to him (and his wife, Suzan) to this day!

2. What qualities do you find in jazz and/or blues that attract your interest?
What attracts me to jazz is the infinite variety of styles, moods, grooves, genres and all combinations that make it the incredible, inclusive and expansive art form it is. The music takes from so many cultures: African, Afro-Caribbean, South American, European folk and classical forms, gospel, and of course, the blues. And all of those forms are expressed in a rhythmic gravity we colloquially call swing, with the sound of surprise found in improvisation.

3. Who are your all time and current favorites?
First, I would have to say Miles Davis, then John Lewis and the Modern Jazz Quartet, Ahmad Jamal, Mary Lou Williams, Duke Ellington, Billy Strayhorn. Of course, John Coltrane, Lester Young, Wayne Shorter, Herbie Hancock, my homeboy Clifford Brown, and the late Geri Allen, to name a very select few.

4. What would you consider your favorite albums?
Miles Davis, Kind of Blue, George Russell, The Jazz Workshop, Ahmad Jamal, But Not For Me: The Ahmad Jamal Trio Live at the Pershing, Bill Evans, Explorations, Wayne Shorter, Speak No Evil, Herbie Hancock, Maiden Voyage, Ornette Coleman, The Shape of Jazz to Come, and The European Concert by the Modern Jazz Quartet.  All of those recordings reflect the late fifties early sixties sensibilities that I responded to when I was learning about the music.

5. What writers do you consider influences and/or personal favorites?

As I mentioned before, Willard Jenkins was very influential. But another man in DC named William (Bill) Brower was also crucial in my development as a writer. Today, Mr. Brower is an esteemed jazz historian, and is the co-owner of his own production company. But he worked as the jazz buyer for the Olsson’s Record & Tape in D.C. when I worked there, circa 1984. Unbeknownst to me at the time, Bill was a major writer who had been published in The Washington Post, JazzTimes, Down Beat, and host of other publications. He was the one who played Kind of Blue in the record store, which ignited my love of the music. What made Bill such an effective teacher was that I learned from listening to him talk to customers about the music – specifically A.B. Spellman, author of Four Lives in the Bebop Business. Bill always gently guided me to what were the important records to listen to. I still talk to him about jazz.

There are others who I learned from: Stanley Crouch, Gary Giddins, Robert G. O’Meally, Arnold Jay Smith, Amiri Baraka, Gene Santoro, Herb Boyd, Albert Murray, and the great pianist/educator Billy Taylor. I still can’t believe that I got a chance to talk to these people about jazz and the craft of writing about it, which still amazes me!

6. Many advertisements, especially local ones, are either cutting back on arts coverage or eliminating it, making it even tougher for jazz and blues artists to get coverage. Do you still see reviews, features and interviews as important in terms of helping the music?
Yes, I do. Given the declining jazz radio outlets, and, as you say, the cutting back of arts coverage in our major newspapers, we need reviews, features and interviews more than ever, but we need them online. We need them in the digital world. I also think we need to integrate jazz coverage into the overall arts coverage around the nation. Too often, jazz is segregated in its reportage and criticism, as if it is separate from other music and art forms. That should change.

7. Do you still listen to or participate in traditional radio, and do you see it as something important in the future as regards jazz and blues?
My background is in radio. I got my start in radio at WLIU-FM at Lincoln University in the late seventies. The station was founded by Gil Scott-Heron. After transferring to Howard University in Washington DC, I spent very valuable time at the student station, WHBC (not be confused with the professional station, WHUR-FM), and I was a substitute DJ at WDCU-FM at the University of the District of Columbia. I interned and produced arts pieces for NPR, and I served as Music and Program Director for WCLK-FM at Clark-Atlanta University from 1990 to 1992. So, it goes without saying that I definitely think that radio, especially internet radio, is crucial to the propagation, and albeit survival of jazz – especially if humans and not algorithms – are programming the music!

8. Do you agree or disagree with those who would favor eliminating the term jazz and instead calling it Great Black Music, Black Classical Music, or some other label?
I certainly understand those who don’t like the term jazz. I understand their reasoning: that for some, the term for some takes the music back its supposedly sordid origins in abodes of ill-repute. For others, the word confines the multitude of musical idioms that fall under that term. There are some who feel that the term refers to the economic, beneath-the-underdog status the music has occupied for some time. Regardless of what it is called, the term jazz is probably here to stay. That is not to say that it is not Black Classical Music (although George Walker, Hale Smith and other African-American composers of the European classical idiom may beg to differ), or Great Black Music. Jazz is a quantum art, which simultaneously possesses multiple descriptions and meanings. And for the record, I love the word, jazz!

9. Do you enjoy other idioms besides jazz and blues?
Absolutely! Because of the music’s multi-faceted components, one cannot help but love other music. Through jazz, I fell in love with Afro-Latin musical forms. Because of the Modern Jazz Quartet, I was able to hear the beauty and tradition of European classical music – particular Bach – beyond my youthful stereotype of it being the music of white supremacy. Ornette Coleman, led me to appreciate country music. Because of my knowledge of jazz, I completely have a deeper appreciation of the soul and R&B I grew up with in the sixties and seventies. And don’t get me started on the large debt hip-hop owes jazz! Where would A Tribe Called Quest’s The Low End Theory by without Ron Carter’s bold basslines?

10. Do you agree or disagree with the contention that free or avant-garde jazz, and to some extent even bop, permanently alienated a large portion of its potential audience and especially Blacks due to distancing itself from popular elements and dance? I think the question should not be limited to the Black audience. There’s so much to unpack here. At one time, bebop was considered “avant-garde” and it was said you couldn’t dance to it, though I know in Philly they danced to “Now’s the Time,” Overall, any music that does not have lyrics and has complex song structures is not going to be popular, regardless of the ethnic makeup of the audience. Surely there are some Black people that don’t like the so-called avant-garde. But I don’t think that should be used to “crowd-shame” an entire group of people. I can say that as a former resident of Washington, D.C., Atlanta and Harlem, I have seen my share of black people at so-called avant-garde gigs.”

11.  Should Trump’s budgetary mandates prevail and such things as NPR and the National Endowment for the Arts are eliminated, what would be the impact on jazz and blues in both the short and long-term?
It would be tragic beyond measure, short and long-term. But ironically, the threat itself can spur more support. Humans have a way of rallying to things when they are in danger of disappearing.

12. Do you agree with the recent NYT decision not to run concert reviews and cut way back on record reviews?
A resounding no! But given the economic realities of newspapers, I saw it coming, especially after the rise of YouTube and a host of competing digital formats and blogs. It was inevitable, but it can be reversed.

13. Would you support there being some kind of national telecast each year recognizing jazz and blues Grammy award winners that was totally separate from the regular Grammys?
Yes. Given the video apartheid jazz has been subjected to during the Grammy network broadcast, we are long overdue for a spotlight on the music, say on PBS.

14. Has the proliferation of jazz courses specifically and the growth of jazz in academia generally in your view aided the music’s growth artistically?
I think the growth of jazz in academia has been one of the music’s greatest victories. Although, as we have seen in the abuses cases at Berklee and Gary Thomas’ unfortunate departure at the Peabody Conservatory in Baltimore, we still have challenges. Still, the fact that academia takes the music seriously is a good thing and long overdue.

15. Do you have an optimistic or pessimistic view of the future as regards jazz and blues?
When it comes to jazz, I’m a realistic optimist: I’ve studied this music long enough – as a retailer, arts administrator, radio program director and journalist – to know that many have predicted its demise from the moment of its inception, yet it refuses to die. It constantly renews itself, often in ways we may not immediately appreciate or understand. The fact that so many young people want to play it – often knowing they won’t get rich doing so – is a testament the music’s everlasting permanence and power.