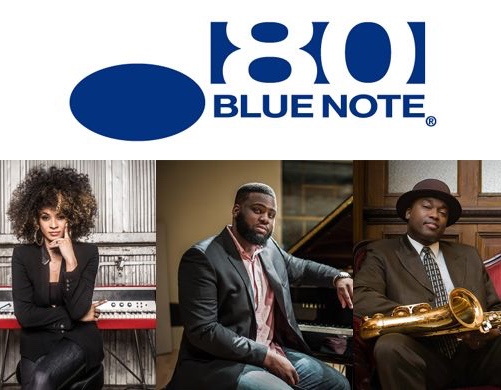 Blue Note Records is an American jazz record label, established in 1939. It derives its name from the characteristic “blue notes” of jazz and the blues. Originally dedicated to recording traditional jazz and small group swing, from 1947 the label began to switch its attention to modern jazz including Thelonious Monk, Art Blakey, Fats Navarro and Bud Powell.

This tour will be celebrating Blue Note’s 80th Anniversary. Under the watchful eye of its president, Don Was. They will be presenting the following three artists in a spectacular celebration of the label and Jazz Music today. Only Blue Note Records, with their unique brand of cool, could assemble such a dynamic evening of talent and music.

Considered the rising star of soul/jazz, Kandace Springs burst upon the scene in 2016 with her debut album Soul Eyes, serving notice that there was a new torch bearer in the great tradition of jazz singers who draw upon the roots of blues, gospel and soul. Kandace’s Nashville church upbringing infuses everything she touches, and with it she has captivated audiences worldwide with her unique approach to a dizzying array of jazz standards, R&B classics, and pop tunes. Chief among her earliest supporters was legendary icon Prince, who became a mentor to the young singer and once described her as having “a voice that could melt snow.”

Kandace’s upcoming album, entitled “The Women Who Raised Me,” is a tribute to all the great female artists who inspired her to pursue her dream, and features songs made famous by legends ranging from Billie Holiday and Carmen McRae, up through contemporary greats Sade and Lauryn Hill. The album features collaborations with such luminaries as Norah Jones, Christian McBride, David Sanborn, and Chris Potter, and will surely further establish, as the Times of London once remarked, that “Kandace Springs is not just a star, she’s a entire galaxy.”

24-year-old James Francies is next in the long line of jazz pianists who have characterized the music of Blue Note.  He has recorded and or performed with Christian McBride, Pat Metheny, Chris Potter, Robert Glasper and Lauryn Hill, among many others. He also performed on Chance The Rapper’s hit single “No Problem” which went on to win 2 Grammy Awards. In addition, he frequently fills-in with The Roots on Jimmy Fallon. He released his album ‘Flight’ through Blue Note Records on 2018.

Detroit born, James Carter, saxophonist extraordinaire, turned 50 in early January.  He has recorded 18 albums under his own name while appearing on many more with artists including The Art Ensemble of Chicago, Ginger Baker (Cream), Kathleen Battle, Herbie Hancock, Wynton Marsalis, Madeleine Peyroux and Marcus Miller, among others. The organ combo reigned for several decades as jazz’s meat-and-potatoes mainstay, a populist vehicle for blues-drenched blowing. In the hands of James Carter, one of jazz’s most sophisticated improvisers, the organ trio is no less meaty and satisfying. But his virtuosic saxophone chops elevate the organ combo to a rarefied realm defined by delectable soul, a gourmet repertoire, and consistently inspired group interplay. Featuring the lithe and muscular keyboard work of Detroit’s rising B3 star Gerard Gibbs and the propulsive drum support of Motor City trap master Alex White, the multigenerational James Carter Organ Trio is now in its seventeenth year – together they released ‘Live from Newport’ in August of 2019 through Blue Note Records.